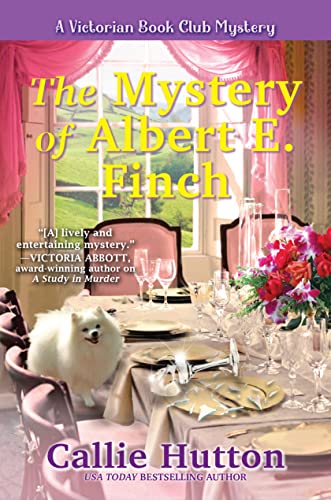 Bath, England, 1892. Celebrated mystery author Lady Amy Lovell is set to tie the knot with Lord William Wethington, a fellow member of the Mystery Book Club of Bath. Amy's great-aunt, Lady Priscilla Granville, has offered to host their wedding at her stately Derby Manor House. But on the eve of the ceremony, the festive air in the drawing room is marred by Mrs. Alice Finch's argument with her husband, Albert, in another room. The next morning at the wedding breakfast, Alice falls face-first into her breakfast—dead.

When Amy and William's favorite detectives are summoned to the house, they see two champagne glasses in front of Mrs. Finch and none in front of her husband. Did Albert give his wife a poisoned drink? Always looking for the easiest solution, the detectives charge Albert with the murder.

But Lady Amy is not convinced that Albert is guilty. There are too many things that don't add up. In the hopes of being able to leave Bath and begin their honeymoon, Amy and William once again take things into their own hands.  Suspects begin to pop up, but nothing takes them more by surprise than the discovery of a second body.

Stuck in Bath until the whole poisonous predicament is solved, Amy and William are anxious to collar the perfidious poisoner and be on their way to their honeymoon. If they can't catch the killer, not only is their newlywed bliss under threat, but they may not live to see happily-ever-after at all.

Bath, England
22 September 1891
“I, Lady Amy Lovell, am a bride.” She stared at her reflection in the looking glass and burst into gales of laughter.

“I am a bride,” she repeated, leaning forward to take a closer look at herself, examining her visage, and wiping the tears of laughter from her eyes.

She, an independent woman who earned her own money—although her brother had taken all her royalty payments and invested them for her, insisting she live on the allowance provided her by the family—and here she was getting married.

To William, of all people.

“Here is the bracelet you wished to borrow from your aunt, my lady.” Sophie, her new lady’s maid hurried into the room, the gold and silver bracelet clutched in her hand. Aunt Margaret had insisted that Amy adhere to the new trend to wear something old, something new, something borrowed, something blue, and a sixpence in her shoe for good luck at her wedding.

Amy had scoffed at the idea, but to keep her aunt, whom she loved dearly and who had raised her from ten years of age, happy, she had agreed to wear the borrowed piece of jewelry.

The bracelet was the last piece she needed to complete the silly tradition. “Thank you, Sophie.” Amy held out her arm so the maid could clasp the bracelet.

Sophie was a new addition to her household. Actually, this would no longer be her household once she married. She would move into William’s townhouse. Amy had gone without a lady’s maid ever since her previous one had left to marry. She had shared Aunt Margaret’s maid when she absolutely needed one.

Because she’d shown up at various affairs a bit disheveled, and many times wearing two different shoes, William had insisted on hiring a maid for her. She hoped he did not think her compliance on this matter meant she planned to bow to all his wishes. But then, she was quite sure he knew her better than to expect that.

“You look absolutely beautiful, my lady,” Sophie said. “Your Lord Wethington will be unable to keep his eyes off you.”

Amy bent and gathered up her skirts in preparation for departure. “Let’s hope that is not the case, since I don’t wish the man to be walking into walls all day.”

They left her room and met Aunt Margaret in the corridor, coming from her bedchamber. “Oh, my dear. You look stunning.” With tears in her eyes, her aunt cupped Amy’s chin in her hand. “I am so pleased that you are marrying, and I can’t think of another man who deserves you more than William.”

Not quite sure if that was a compliment or a slight insult, Amy found tears gathering in her  eyes as well, and leaned in to hug her aunt. “In case I’ve never said it, I love you very much, dear Aunt, and thank you so much for all the love and attention with which you’ve showered me over the years.”

Both ladies patted their eyes. Amy had to swallow a few times to get herself under control.

“Are you ladies coming down, or do we have to come up there and fetch you?” Michael, the Earl of Davenport, Amy’s brother and only sibling called from the entry hall.

“We’re coming,” Aunt Margaret said. “My goodness we do have time, you know.”

As they reached the bottom of the staircase, Michael, and Amy’s father, the Marquess of Winchester, stood gaping at her. Papa extended both hands toward his daughter, taking hers in his large, warm ones. “My beloved daughter, you are the image of your dear mother.  She would be most proud of you today.”

Another flood of tears arrived in her eyes, and Amy blinked furiously to rid herself of the cursed things. “Oh, Papa, I do miss her, and I truly wish she were here.”

Michael cleared his throat. “Are we to keep poor William pacing in the church, nervous that his bride has changed her mind? Or should we take pity on the man, as he’s losing his freedom today, and hurry ourselves to the church?”

Amy shook her head. “Michael, you always manage to say the wrong thing.” With a smile and a kiss on Papa’s cheek, she took his arm, and they left the house.

In the past two days, almost all her belongings had been sent to William’s house. They would spend the night there and then travel the next morning to Brighton Beach, Amy’s favorite place in the world, for a honeymoon. With that in mind, she turned back as she moved to climb into the carriage and gazed longingly at the townhouse she’d lived in most of her life.

An extraordinary and unreservedly recommended addition.

There is so very much to love in this book! The wit and humor will keep you smiling even while you are commiserating with poor William who just wants to go on his honeymoon. The crimes will puzzle you – but you might think you know who committed one of the murders – but what about the other? You’ll root for Amy’s brother to get his own HEA, and you’ll take great delight at seeing Amy’s father thwarted.

I definitely recommend this book and this series. I hope you’ll give it a read and love it as much as I did.

Great story. The marriage of Amy and William did not disappoint!! It followed their path of murder and mayhem. Who else but these two would a murder committed at the wedding breakfast?