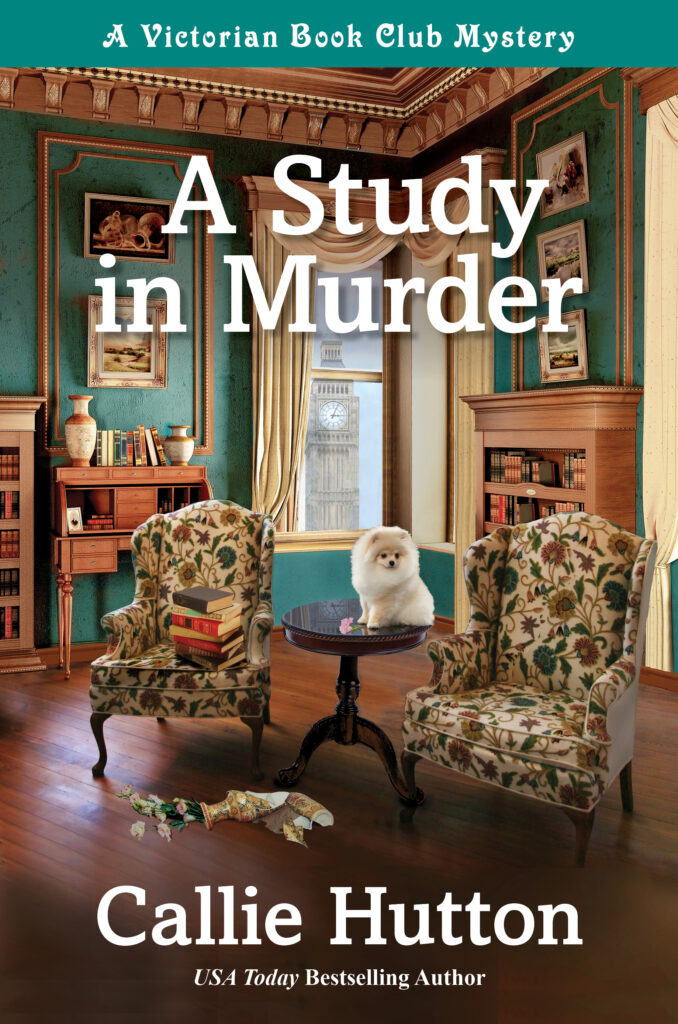 Two evenings later, as Lady Amy awaits a visit from Lord William Wethington, fellow member of the Bath Mystery Book Club, her former fiancé makes an unexpected and most unwelcome appearance at her house. She promptly sends him to the library to cool his heels but later discovers the room seemingly empty--until she stumbles upon a dead Mr. St. Vincent with a knife in his chest.

Lord Wethington arrives to find Lady Amy screaming and sends for the police, but the Bobbies immediately assume that she is the killer. Desperate to clear her name, Lady Amy and Lord Wethington launch their own investigation--and stir up a hornet's nest of suspects, from the gardener who served time in prison for murder to a vengeful woman who was spurned by St. Vincent before he proposed to Lady Amy.

Can they close the book on the case before the real killer gets away with murder?

Lady Amy Lovell, only daughter of the Marquess of Winchester,hurried up the steps of St. Swithin’s, the old and stately church on the Paragon in the Walcot area of Bath, barely on time for the Sunday service. As usual, she arrived ten minutes past her aunt Margaret, who had never in all her life been late for a church service. Or anything else.

Her aunt shifted over in the family pew as Amy slid in alongside her. She offered her a hymnal, a Bible, and a slight roll of her warm brown eyes.

Amy looked around the church, comfortable with familiar faces. There were the Misses O’Neill, Miss Penelope and Miss Gertrude, who made it their responsibility to make sure everyone knew of their particular devotion to the church. Their usual flowered dresses matched each other’s, as did their blue-and-pink straw hats. They were not twins, but for some odd reason pretended to be, although they looked nothing alike and their heights were separated by almost a foot.

Amy’s heart slowed down from the race to church, and she settled her hands in her lap as the pastor, Mr. Palmer, began his Sunday sermon.

Despite her best intentions, Amy’s mind drifted to her latest novel. Like her other self, the famous mystery author E. D. Burton, her mind was always filled with murder and mayhem. In her most recent work, she was stymied by the last red herring she’d thrown into the mix. She needed some guidance and knew exactly what research book would help, but she’d been unable to find a copy anywhere in Bath. Or even in London when she’d made the trek there to search for the tome.

Mr. Palmer was finishing up his sermon when Amy realized she’d spent the entire time dwelling on her story and hadn’t heard a word the man had said. She made a quick apology to God as the congregation stood and sang the last hymn.

“Good heavens, Amy, are you aware that you are wearing two different shoes?” Aunt Margaret pointed to Amy’s feet as the last note was sung.

“Yes, I know, Aunt, but they are actually the same shoes, just different colors. I purposely bought them that way in case something like this happened.”

“Something like what happened?” Aunt Margaret smiled and nodded at the pastor as they made their way out of the church and down the steps.

“That I can find only one shoe when it is time to leave the house.” She did try to be more organized and had often thought of hiring someone to just help her keep track of … well … herself. But her last lady’s maid had left the year before to marry, and Amy never seemed to find the time to interview new candidates for the job.

Aunt Margaret, younger sister of Amy’s father, had practically raised her once Lady Winchester passed away of an ague when Amy was ten years old. Aunt Margaret had only been Amy’s present age, five and twenty, when her role as surrogate mother began. As much as they loved each other, Amy and Aunt Margaret could not have been more different.

While her aunt was willowy and above average in height for a woman, with ordinary yet lovely features, straight brown hair, and a gait that caused her to almost glide rather than walk, Amy was of less than medium height, and while not plump, she certainly possessed enough curves to fill out her clothes. Her always-in-disarray curly auburn hair and hazel eyes had come to her from her Scottish mother, as had the light freckles peppering her cheeks.

Amy was the devoted owner of a yapping, white fluffy Pomeranian dog with a missing tail and a propensity for hiding slippers all over the house. Aunt Margaret, meanwhile, possessed a thirty-year-old cockatoo who quoted Shakespeare. Nevertheless, the two women lived in harmony in Winchester Townhouse on fashionable Westgate Street in Bath.

Amy took in a deep breath of fresh air in the bright sunshine as they strolled arm in arm to the Friendship Hall for lunch, greeting other church members on the way. The first Sunday of every month was Social Sunday, when the congregants shared a meal that each woman had contributed to.

“If you would set some sort of a schedule for yourself when you are involved in a new book, it would certainly help to tame your life. So many hours of writing, so many hours of other activities.” Aunt looked pointedly at Amy’s shoes. “Like taking care of yourself.”

“Good morning, ladies.” Viscount Wethington, a longtime friend and fellow Mystery Book Club member, stepped into their path and removed his hat as he greeted Amy and Aunt Margaret. Offering a slight bow, he said, “You are both looking quite fetching. Almost as lovely as the day.”

“Good morning to you, my lord.” Aunt Margaret returned the greeting, flashing a bright smile. His lordship had always been a favorite of her aunt’s. More than once Amy had felt the slight—or not-so-slight—nudge from Aunt toward Lord Wethington, better known by his friends as William.

Although a viscount, William had never been one to stand on titles. He was a pleasant-looking man in his early thirties, with light-brown hair and blue eyes. His perpetual smile made him a favorite among their circle of friends. Particularly the ladies. To whom he never seemed to grant much attention.

Amy had once asked him why he had never married, and after a lengthy, silent stare he had asked the same question of her. Which had brought an abrupt end to that conversation.

“May I escort you to the hall for lunch?” Ever the gentleman, William extended both elbows so the ladies could walk with him. Amy could not help but compare him to her betrothed, Mr. St. Vincent. Not that St. Vincent would not have acted the gentleman, but his actions always seemed to speak more of impressing those observing him. She pushed thoughts of him and that yet-to-be resolved problem from her mind to deal with later.

The hall quickly filled up, the noise of laughter and conversation filling the space. William held out a chair for Aunt Margaret and then another for Amy. “Have you finished reading A Study in Scarlet?” He settled next to Amy and turned to face her. “I have found something quite interesting about the story.”

Both she and William were longtime members of the Mystery Book Club of Bath. The group met every Thursday to discuss various mystery books. They were currently reading Arthur Conan Doyle’s story of detective Sherlock Holmes.

“I am in the process of reading the story. What is the interesting thing you discovered about the piece?”

William nodded his thanks to the young girl who placed two glasses of lemonade in front of them. “Ah, I am not going to reveal my discovery until the meeting. I want to know if you notice the same thing I did.”

“Goodness. How am I to know that I’ve discovered the same thing you’ve discovered if you don’t tell me what it is you’ve discovered?” They served themselves from large platters placed on each table. Today’s array of food consisted of various salads as well as ham, chicken, and roast beef. Since neither Amy nor Aunt Margaret knew her way around the kitchen very well, they had contributed warm rolls and sweet buns Cook had made.

Amy eyed her plate, her stomach rumbling, as she thought on William’s question. “You know I hate it when you toss out these innuendoes. And you do it all the time.” She placed her hand over her middle, hoping to quell the embarrassing noise.

“No, fair lady. I do not do it all the time. Sometimes I sleep, sometimes I go for a walk, sometimes—”

“Enough!” Aunt Margaret smiled at the two of them as if they were children needing a reprimand. “We are about to have the blessing.”

Feeling like a child bickering with her sibling, Amy bowed her head while she wondered what interesting fact William had uncovered that she had obviously missed.

With a breezy style and alluring, low-keyed humor, Hutton crafts a charming mystery with a delightful, irrepressible sleuth.

This book is a delight! . . . A Study in Murder has clear echoes of Jane Austen, Agatha Christie, and of course, Sherlock Holmes. You will love this book.

A breath of fresh air with a heroine that is smart, clever, and brazen.