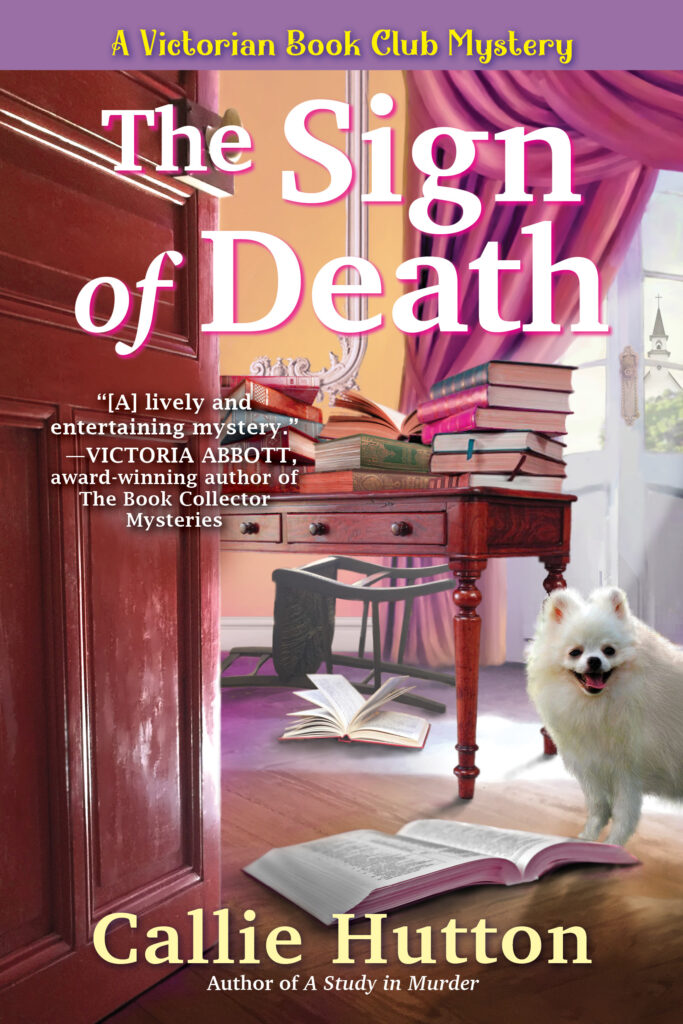 Bath, England, 1891. Mr. James Harding was a lot of things--businessman, well-to-do, probable scoundrel--but a drinker he most assuredly was not. So when Harding is believed to have drunkenly fallen to his death into the icy River Avon, Lord William Wethington is immediately suspicious. Finding Lord William's name on a letter in the victim's pocket, the local constabulary summons William to identify the victim. Police detectives learn that William had been one of Harding's business clients--and undoubtedly not the only client the dead man had cheated.

William entreats Lady Amy Lovell, a fellow member of the Mystery Book Club of Bath, to help him deduce what really happened to the late Mr. Harding. Lady Amy, a celebrated mystery author herself, once called on William to h

Practically every one of Harding's many clients had ample reason to want to do him in. And there's precious little time to narrow down the list: William and Amy soon become prime suspects themselves when the police discover them ruffling through files in Harding's house. Lady Amy will have to be as clever as her characters if she's to save William from the gallows...and herself from Harding's real killer.

William, Viscount Wethington, stared in horror at the missive in his hand, the blood draining from his head. He read it a second and then a third time, but the words never changed.

After much consideration I have decided to retire from our townhouse in London and take up residence with you in Bath. Since the family holding is quite large, there is no reason for me to seek my own dwelling.

I have many things to do to close up the London townhouse, so it will be a week or two before I arrive.

I am so looking forward to spending time with my only son.

His mother was coming to live with him.

They had not lived under the same roof for so many years that he’d lost count. He loved his mother dearly, but she consulted her dead husband for advice, found happiness and joy in every second of her life, which could be trying on some days, and had a tendency to get lost if she walked more than a block from her home.

Worst of all, his beloved mother was also determined to see him married with children. He oftentimes thought the sole reason she had given birth to him and his sister, Valerie, now the Countess Denby, was to provide her with grandchildren.

When he reminded her that Valerie and her husband had been reproducing at an alarming rate—seven children so far—she sniffed and said that as much as she loved them, she needed grandchildren she could see regularly. The earl and countess were currently living in France.

He pinched the bridge of his nose and closed his eyes. She was correct, the house was very large, but nothing was large enough to shelter both him and his mother. He folded the letter and dropped it on his desk, relegating it to the list of things to think about after a brandy. Or two.

James Harding, his man of business, was due to arrive any moment. William had an uncomfortable feeling that something wasn’t right with his finances, though he had very little to go on.

He’d employed James for three years and had never had reason to mistrust the man. However, some of his own numbers did not add up to the information James had last provided.

William’s father, the former Viscount Wethington, had left him a tidy sum when he passed away, but William, wanting to ensure his future—and yes, the future of his one-day children—had used a good portion of the money to invest in various businesses and stocks.

He currently held an interest in two restaurants, one hotel, a small bank, and a printing company. Although James had advised against it, William had also financed a couple of industrial ventures in the United States, which were currently his best-performing investments.

His government bonds were solid as his railroad stock. Yet something wasn’t right, and he hoped to discover what it was today and set his worries aside.

He shook his head. Lord knew he had enough to worry about with Mother moving into his house.

“My lord, a note has arrived for you.” His butler, Madison, entered the library and held out a folded piece of paper.

William opened the note and frowned. It appeared that Mr. Harding was ill and unable to attend him. He looked up at Madison. “Thank you. No response is required.”

He stared at the note on his desk, considering this latest development. When had he started mistrusting James? A little more than three years together, and only recently had he felt a shift in their arrangement. Hopefully the man was legitimately ill and not just avoiding him.

William stood and strolled over to the window, his hands clasped behind his back. The garden was bleak as the day: cloudy, damp, and dismal. This time of the year was his least favorite. The merriment of Yuletide had ended, and nothing would appear on the horizon for a few months.

Shaking off his gloom, he strode from the room and made a last-minute decision to call on Lady Amy. He always smiled when he thought of her. She was a fellow member of the Mystery Book Club of Bath as well as a congregant in his church, St. Swithin’s.

Several months before, they’d worked together on solving the mystery of the death of her ex-fiancé, Mr. Ronald St. Vincent. As unusual as it sounded for there to be a gently reared young lady involving herself in a murder investigation, the subject of homicide was not something completely unfamiliar to Lady Amy. Unbeknownst to the public, she was the very well-known murder mystery author E. D. Burton, a fact he had learned during the course of their investigation.

He still smiled whenever he thought of that.

“I will return in time for dinner,” William said to Madison as he shrugged into his coat.

“Very good, my lord. I will advise Cook.”

He strode to the small stable at the back of his home to tack his horse, Major. The Cleveland Bay had been carrying him about town for many years.

The familiar, comforting smell of hay and animal greeted him as he approached Major’s stall. He ran his palm down the horse’s satin nose. “I promise I will take you for a good run sometime soon. I’m afraid right now we’re only traveling to Lady Amy’s house.”

Almost as if the horse understood, he stomped his foot and shook his head. William spoke soothing words to the animal as he finished tacking, then led him from the stable and mounted. With a squeeze of his thighs, he headed away from Wethington Manor toward Amy’s house.

A delightful combination of mystery and romance with some unexpected twists.

Callie Hutton knows how to keep the reader's attention from the first page until the very last word...The way that Hutton orchestrates things is magical.

Plenty of twists in the plot lines, both mystery and romantic...a pleasant read that lovers of historical cozies should enjoy.