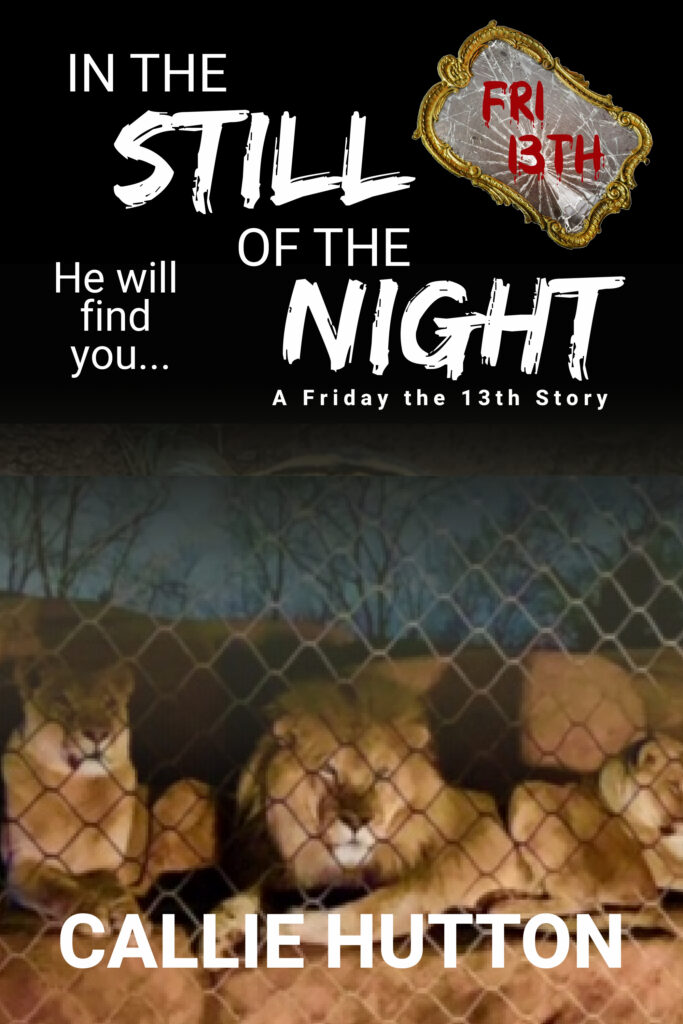 Part of the Friday the 13th series:

It was supposed to be just another overnight shift at the zoo where Holly McCabe worked…until she discovered something more dangerous than lions and tigers lurked in the darkness.

Holly McCabe works the overnight shift at the local zoo. She likes the peace and quiet but never forgets that the only thing separating her from the dangerous animals surrounding her is a fence, a moat, or a sheet of unbreakable glass.

What Holly doesn’t know is that on this night, a greater threat lurks in the darkness at the zoo. Someone who has revenge in mind. Someone who wants to kill her. But first, like the great cats on display at the zoo, he will play with her.

Holly McCabe checked her uniform in the mirror one more time before picking up her keys to leave the bedroom. The sound of a key in the front door lock put a smile on her face. She was about to have her daily ten-minute visit with her husband.

Brad was returning home from duty as a police officer where he worked the two in the afternoon to the ten at night shift. Holly worked at the local zoo on the overnight shift, from eleven at night to seven in the morning.

Life was stressful for them, but it would all end in another two months. They had worked these crazy shifts for three years to accommodate their school schedules. Brad was close to graduating from law school, and Holly was almost finished with her master’s degree in education.

A future with a normal life and normal hours was close enough that she was now growing anxious for it all to end. Sort of like falling apart once you could see the light at the end of the tunnel. Something Brad accused her of all the time.

“Hey, babe, how was your shift?” She walked up to her husband and threw her arms around his neck. She loved the feel of his muscles under his shirt and the protective way he held her in his arms. The fading familiar scent of his shower gel and his own unique smell had her wishing they had time to do more than merely kiss and cuddle.

“An easy one tonight.” He pulled her closer, cupping her head, and kissed her like they had all the time in the world to enjoy each other. Alas, they did not.

Holly pulled back and studied him. He might have had an easy shift, but the strain was showing on his face. He looked tired. She fiddled with his collar. “Tell me again how this will all end soon.”

“It will, honey. Just be patient.” He pulled her back to his warm chest and rubbed circles on her back. “We’re nearing the end. I know it’s been a rough three years, but it will be worth it.”

She straightened and sighed. “I know.”

Holly’s usual routine was grabbing a large latte with an extra shot of expresso after she finished her shift, then school most days, getting homework done there until her classes started. Then it was home, a few hours of sleep and then up again to start all over.

Brad would grab a few hours of sleep after arriving home, then study until his classes, then from there directly to work.

One thing they were able to do to help their marriage was juggle their schedules so they had the same two days off each week. Once Holly’s shift this night was over, they’d have two days—and nights—to do what most young married couples like to do. Stay in bed most of the time.

Sadly, in their case—to catch up on sleep.

Holly glanced at her watch. “I gotta go.” She pulled his head in for another kiss and then picked up her keys again and headed to the door. “See you in the morning.”

Holly smiled as she closed the door. Brad said that every night when she left for work. Heck, he said it every time she left the house. Being a police officer made him a bit on the precautious side.

It was a lengthy drive to the zoo, but Holly passed the time singing at the top of her lungs to the music coming from the flash drive with all her favorite songs on it. A quick stop at the local non-Starbucks coffee shop for a frozen coffee was her final task before she reached the front gate of the zoo. She and Brad and a bunch of their friends boycotted Starbucks because of their lack of support for law enforcement.

The Security Department had left the door to the employees’ entrance unlocked again. Although Holly carried a set of keys to all the entrances, the team was lax in locking the employees’ door.

“Hey, guys. How did the day go?” Holly greeted the four security guards for the evening shift, which ran from three in the afternoon until eleven thirty at night. The half hour that both teams were present gave them the opportunity to report on the general state of the zoo, anything the night shift needed to know, and any expected repairmen or trash collectors that would need to be allowed entrance and escort.

“Am I late again?” Rebecca Spence hurried into the room as they were finishing up their report. Rebecca was one of the two people with whom Holly worked the overnight shift. With the way the schedules worked out, some nights there were two of them and some nights three. Tonight, it was just Holly and Rebecca.

While Holly wouldn’t say she actually disliked Rebecca, the two women had never really hit a rapport. Holly found Rebecca to be on the lazy side, always looking for ways to get out of doing her job. She always seemed to have a medical issue. Headaches, stomach problems, and the occasional bug bite that required hysteria over whether she was allergic to that sort of bug and should they call EMSA.

Once the evening shift departed, leaving just Holly and Rebecca, Holly checked her emails, looked over the day summary, and flipped over the calendar page, noting that in a matter of an hour it would be Friday the 13th. Thankfully, she wasn’t superstitious.

Rebecca chatted on and on about her boyfriend and how she thought he was cheating on her. After a minute or two, Holly tuned her out and continued with her work.

When it came time to start their rounds, Rebecca said as she sailed out the door, “I’ll take the back of the zoo tonight.”

“Fine.” Holly grabbed her radio, flashlight, and keys. She picked up her cell phone and noticed it had only 4% power. “Damn.” She’d again forgotten to charge it while she slept. She plugged it into the charger on her desk then left behind Rebecca.

In all a short read at no moment lacking with a very resilient heroine and the monster waiting to pounce in the shadows.

Two women working alone late at night outside at the zoo plus an insane stalker equals an intense, dramatic, frightening story. Holly and Rebecca are going about their usual routine, when they lose radio contact. Holly finds Rebecca on the path near the back of the zoo, her throat cut. Now she is on the run to escape an employee fired for harassment. He not only isn’t taking the termination well; he’s determined to have Holly. She needs to evade him, get back to her phone, and find a way to escape. Oh, and now the chimpanzees are loose. Can she do it? This one is scary good! Worthy of Friday 13th!

A fantastic story with suspance, mysteries and more...
What will happen during a night in the zoo?
A lot of things... Surprises, twists until the end in this entertainment story...