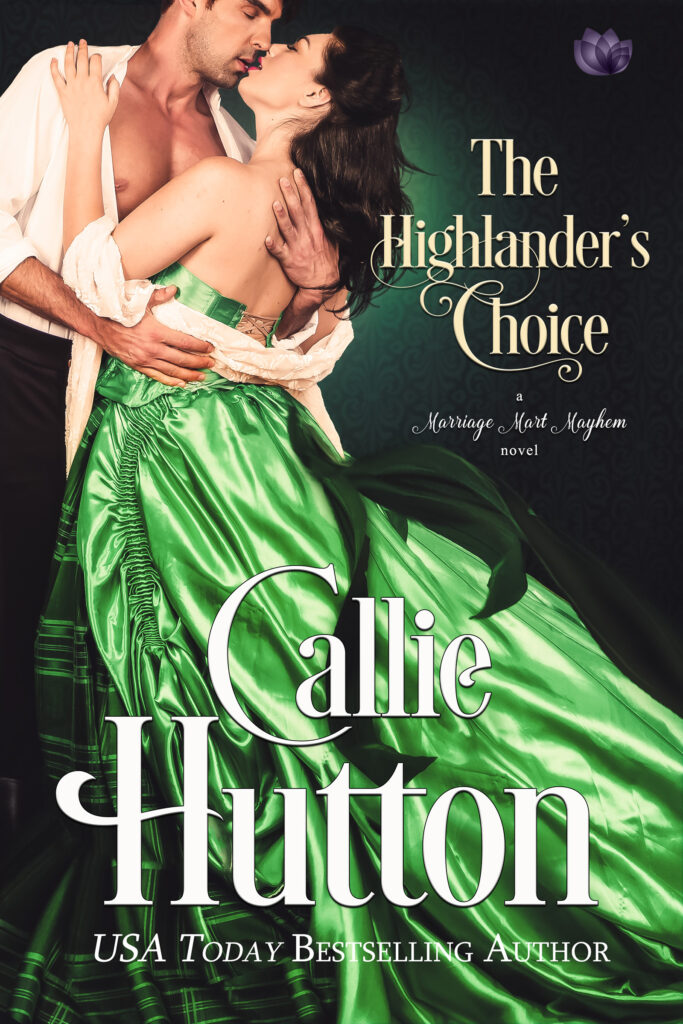 The Scottish Highlands, 1815. Lady Sybil Lacey is every inch an English woman. She's horrified her best friend is wedding a barbarian Scot. For aren't Scots naught but brutish, whiskey-swilling lechers? So to find herself secretly attracted to the tall and devastatingly handsome Scottish laird of Bedlay Castle is quite disconcerting...

Liam MacBride is convinced that English ladies are silly sassenachs who think of nothing but social events and clothes. So why is he intensely drawn to Lady Sybil? All they do is quarrel...until loathing turns into undeniable lust.

A tempestuous, fiery romance between an English lady and a Scottish laird cannot end well.

Lady Sybil Lacey stepped out of the carriage that had held her prisoner for five long days on the journey from England to the wilds of Scotland. She stretched her tight, sore muscles and turned to her best friend, Lady Margaret Somerville, who alighted from the carriage next.

“It is very big,” Margaret breathed, staring wide-eyed at the castle in front of them, her face a pale white. “How will I ever find my way around?”

Sybil patted her friend’s hand. “Have no fear. You will doubtless know your way around before I leave to return home.”

Margaret tugged Sybil closer to her side. “I wish you could stay forever.”

In some ways this trip had seemed to take forever. For the

first time in her life, Sybil and her twin, Sarah had been apart for longer than a few hours. As much as she was enjoying the journey and looking forward to her friend’s wedding she’d felt as though part of her had been left behind in England.

Shaking herself from her ruminations, Sybil placed her hand firmly around her friend’s waist, moving her forward and said, “Bridal nerves. That is all that is troubling you. You will be fine, and will no doubt be so enthralled with married life that you shan’t even notice I’m gone.”

Despite her encouraging words, Sybil thought her dear friend was cork-brained to consider marrying a Scotsman—and a Highlander, no less. The two friends, along with Sarah, had made their come-outs together. Since the Lacey girls were notorious among the ton for holding out for love matches, no one was surprised that despite very successful years, no man had measured up. The Lacey twins went year after year unspoken for. Much like their older sister, Abigail, who had only recently married.

On the other hand, Lord and Lady Somerville had told Margaret if she did not choose a man herself, they would do it for her. To Sybil’s horror, but not necessarily it seemed, to Margaret’s displeasure, her parents chose an occasional guest at their home, Laird Duncan McKinnon, a distant relative of Lady Somerville. And a Scotsman.

“This looks like a lovely home, Margaret,” Lady Somerville said as she linked her arm in her daughter’s. “I am sure you will be quite happy here at Dundas.”

“Do you think so, mother? It is rather large.” Margaret cast a doubtful glance at the woman.

Lord Somerville strode up alongside his wife and daughter. “No matter, my dear. I’ve no doubt you will do well.”

The immense front door opened and Sybil started, prepared to see huge beastly men charge out, shouting barbaric words and waving swords. As far as she was concerned, Scotsmen spent their time brawling, slaking their lust, and making whiskey. She had never met Margaret’s betrothed and had no real expectation of a well-bred husband for her friend.

The two men who framed the doorway took up the entire space in the portal, despite its considerable size. Both men were well over six feet and as broad across the chest as a gorilla Sybil had once seen in a zoological book. She glanced at Margaret who had grown even paler.

“Which one is your betrothed?” Sybil whispered.

Margaret licked her lips and leaned closer. “Laird Duncan McKinnon is on the right. He is called The McKinnon.”

Sybil studied the man as he and his partner both descended the steps and marched toward their group.

As they grew closer, Sybil found herself stepping back, suddenly breathless as they blocked out the scant sun setting behind the castle. Good heavens, they grew them large in the Highlands!

“Lady Somerville.” Duncan bowed over the woman’s hand. “And my Lord.” He nodded in Lord Somerville’s direction. Then he turned to Margaret, taking her hand and raising it to his lips. “My dear. I am pleased to see you. I trust you had an uneventful journey?”

Margaret went from pale white to crimson as McKinnon bestowed a kiss on her hand.

“And is this your friend, Lady Sybil?” McKinnon turned to Sybil.

Still trying to recover her breath, Sybil closed her mouth, embarrassed to realize it hung open, and extended her hand to Margaret’s betrothed. Then she glanced in the direction of McKinnon’s companion. Any attempt to regain her breathing was lost as she took in the sight of mischievous eyes staring directly at her.

The man was a giant. There was simply no other word for it. His ginger colored hair touched his massive shoulders, surrounding a face much too handsome for a brawling Scot.

Her glance roved down, over his trim waist, narrow hips and muscular thighs encased in tight breeches much like the ones English gentlemen wore. But no English gentlemen she’d ever seen had filled them out so.

The sound of The McKinnon clearing his throat drew her attention. Her heart sped up and heat flooded her face when she saw her friend’s betrothed smirking in her direction.

Oh good heavens, she’d been caught staring. Hopefully, she wasn’t drooling, as well and she tamped down the urge to wipe her lips.

“Ladies and my lord, may I present my friend and neighbor, Liam, The MacBride.” He paused, taking Sybil’s hand. “Liam, may I make known to you my betrothed, Lady Margaret, her parents Lord and Lady Somerville, and Lady Margaret’s friend, Lady Sybil.”

The green-eyed giant took Sybil’s hand and gave it a squeeze. His full lips tilted in a slight knowing smile. “My lady. ’Tis a pleasure.”

Sybil drew herself up and made a quick curtsey, still trying to shake her reaction to the two large men. She pulled her hand back, feeling as though it burned where the laird’s hand had touched hers. The grin and his mirthful eyes

confirmed her opinion of Scots. What time they didn’t spend drinking whiskey and brawling in the mud, they saved for lustful pursuits. She would need to stay far away from this one.

She breathed a sigh of relief when Duncan’s friend turned his attention to Margaret and Lady Somerville.

Sybil took the opportunity to recover her dignity and study the castle that would be her friend’s home. Despite the architecture indicating it as very old, it seemed well-maintained. A drawbridge lay across what, at one time, must have been a moat, but it was now dried up. It was a small structure, as castles go, but still imposing.

“My lady?” The MacBride extended his arm to Sybil, calling her attention back from the castle and to the group who now moved toward the entrance. She placed her hand on his rock-hard arm, noting that her diminutive size only brought the top of her head to his chin.

“Did you have a pleasant journey, lass?” Liam’s deep voice slid over her like warm honey.

Disgusted at how her heartbeat sped up and her breathing once again hitched, she raised her chin. “There is nothing pleasant about being inside a carriage for five days.”

Good heavens I sound like a shrew. Why am I snapping at the man for asking a polite question?

She glanced sideways at her companion, taking in his tightened lips and shuttered eyes. Well, that was wonderful.

She was out of the carriage merely minutes and already she’d managed to present herself as a bad-tempered harridan.

Attempting a smile, she took a deep breath and said, “I apologize, sir. I fear the trip has left me more tired than I realized.”

“I understand, I ken travel is a strain on a lady such as yerself.”

There was one of those strange words that Scots insisted on using. Why didn’t he just say he knew travel was a strain?

How would Margaret adapt to this foreign land and peculiar way of life? And what did his comment, “a lady such as yerself’” mean? Had she just been insulted?

Margaret and her betrothed chatted easily as they made their way across the drawbridge and into the castle. If her friend noticed anything odd about Duncan’s language, or her surroundings, it didn’t show. Perhaps it wouldn’t be so difficult for Margaret to adapt.

The large door led them to a type of courtyard that surrounded the castle itself. She knew from her history that Highland castles at one time were “keeps” and the inside courtyard was where the clan worked, merchants brought their wares, and villagers gathered for safety when attacked by enemies.

“With no lady of the manor since my mum passed, I depend a great deal on my châtelaine, Mrs. Galbraith, to handle most things.” He turned to Margaret. “I look forward to having ye take over those duties once we are married.”

Margaret nodded briefly and threw a worried glance at her mother, who smiled encouragingly.

“Mrs. Galbraith has arranged for yer trunks to be brought up to yer rooms. She has also instructed that baths be prepared for the ladies.” Duncan came to a halt and directed his comments to Lady Somerville. “We sup at six o’clock in the great hall.”

Lady Somerville inclined her head and thanked their host. The three women proceeded up the winding staircase to the second floor, guided by a chatty, cheerful woman who waxed eloquent about all the preparations underway for the wedding in two weeks. Lord Somerville brought up the rear.

...one of the best highland romances that I have ever read.

This book was just so well written and the story itself I totally loved. I believe that a sign of a truly great book is one where the author can transport someone to another place without leaving home, and this one fits the bill.

I am, Indeed Book Reviews wrote:

Moments of humor are well set, keeping the animosity at a slow simmer,rather than boiling over despite the dissenting opinions and desires.Fast paced, cleverly set twists and turns truly set tests for Sybil and Liam, if they survive it all, their burning attraction just may be something more.