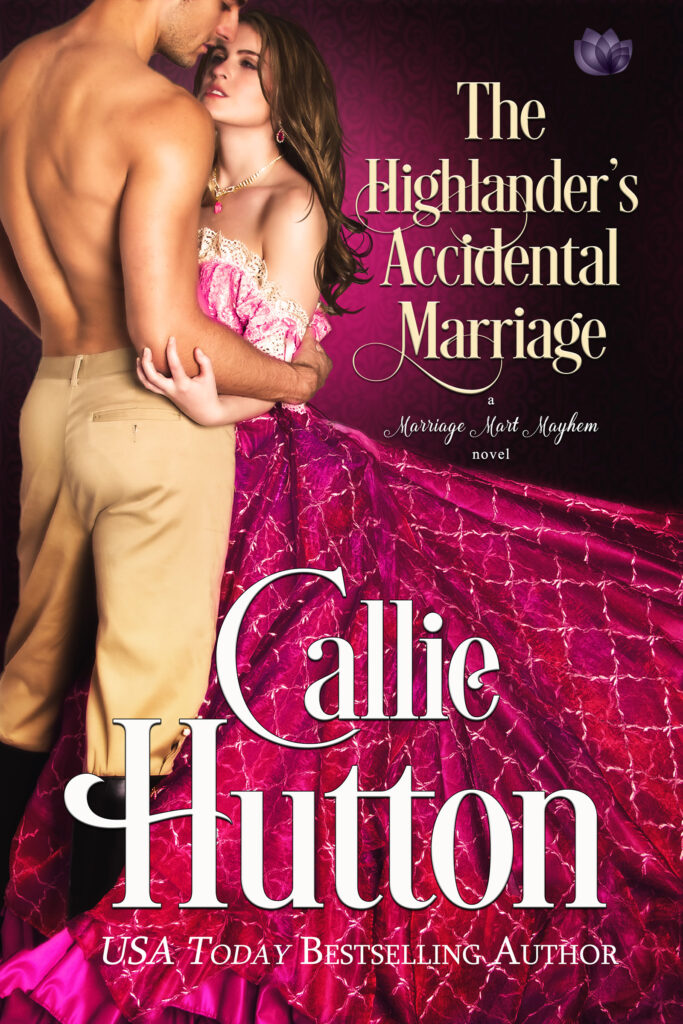 Scotland, 1817. The Duke of Manchester's sister, Lady Sarah Lacey, always abides by the rules of etiquette. Fate, however, has no such confines. On a journey to the Scottish Highlands, Lady Sarah is set upon by misfortune-leaving her without carriage or chaperone, and left to the mercy of a kind and handsome gentleman. Whom (in order to secure a room at an inn) she announces is her husband.

When she proclaims they're married in public, Professor Braeden McKinnon can't bring himself to correct the lovely Lady Sarah. After all, her reputation would be ruined. Nor can he tell her that her proclamation is not only legally binding in Scotland, but sharing a room is considered to be an act of consummation...

Now they are bound together until death do they part-even if Sarah has no intention of becoming any man's wife.

April, 1817
On a road outside of Edinburgh, Scotland

Braeden McKinnon glanced up at the sky at the light drizzle and menacing clouds gathering. “I hope we make it to the inn before the skies open up.” His voice carried in the wind to Monty Blackwood riding beside him, both of their horses covered with sweat from the hard ride.

“Ach, it won’t be the first time we’ve gotten soaked.”

“Nay. And not the last,” Braeden said. They continued on for several minutes, the wind whipping around them preventing any type of conversation.

They’d been on the road from Edinburgh University for most of the morning. Braeden was on his way home to the northwestern Highlands and Monty to his on the east coast. Although the difference in their ages spanned two decades, they were close friends and fellow professors at the esteemed school.

At twenty-eight, Braeden was the youngest full professor at Edinburgh and, indeed, probably in all of Scotland and England. As odd as the situation was, given his superior intellect, he’d always been more comfortable with those much older than him.

“What is that up ahead?” Monty pulled on the reins to slow his horse at the sight of two women standing at the side of the road. One woman had her arm around the other, obviously comforting her.

“’Tis the middle of nowhere. What the devil are they doing?” Monty’s brow furrowed as they came to a complete halt.

Braeden slid from his horse and strode to the women.

The wee one, with huge hazel eyes and dark brown curls tumbling around her ears continued to pat the other one on the back. “We had an accident.” Her voice came out breathless and shaky. Her pale features and wide eyes registered shock.

“What sort of an accident?” Monty said as he joined them.

The other lady, older and obviously the employer of the tiny maid, wailed. “Our carriage slid in the mud, and then hit that boulder.” She pointed to the massive protrusion a bit farther down. “And then…and then…” She buried her head into her maid’s neck.

Her speech told him the ladies were from England—far from home.

The maid once again patted the older woman on the back. “It’s all right. Just try to calm yourself.” She turned to Braeden. “Both of us were thrown from the carriage when the door swung open after it hit the boulder. But the carriage went over the side. I’m terribly afraid the driver and footman, along with the poor horses, might have been injured. Or perhaps even killed.”

The little bit of drizzle had turned into a steady rain.

The only shelter was a copse of trees a short distance from the road. “Why don’t ye lasses move over under those trees?

Monty and I will see what we can learn about yer driver and footman.”

“We shouldn’t be talking to them, it is not proper.” The older woman kept her back to them, but her whispered words reached him anyway.

“Madam, we are not standing in a London ballroom, I’m afraid. Ye need to get yerselves out of the rain and let us take a look at the carriage. If it makes ye feel better, I am Professor Braeden McKinnon, and this is Professor Monty Blackwood. We’re both scholars at Edinburgh University.”

Realizing the women were distraught, he softened his voice.

“I ken this is not a formal introduction, but ’tis the best we can do for now.”

“Yes, dear, we are in Scotland, remember?” The wee one tilted her lips in a slight smile at Braeden. He shook his head at the nonsense London ladies were wont to spout off.

“See, now all is fine. Let us go out of the rain and allow the men to do what they need to.” Thank goodness the young maid had a great deal more sense than her employer.

She urged the older woman toward the copse of trees.

He stared after them. By the saints, even with her wet hair plastered to her forehead and the rain dripping from her pert nose, the lass was beautiful. Though tiny, she had curves in all the right places. His hands itched to run over the dips and rises of her body. Ach! He didn’t usually have such a fascination for a lass.

Beautiful adventure between an English lady and a sexy highlander! 5 stars

Five Stars, TOP PICK,"I cannot recommend this series highly enough and so far this particularstory is my favorite.

A lovely regency romance that had me laughing and crying all in one breath. It was unique to the genre and i would love to read more from Callie Hutton.