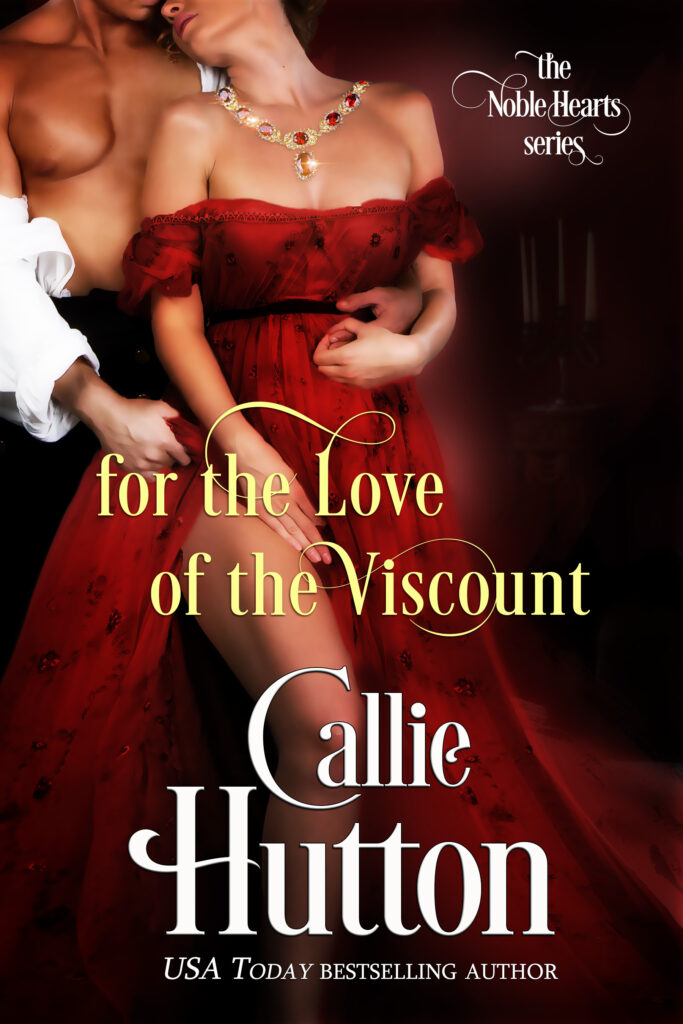 Part of the Noble Hearts series:

A pretend courtship can only if work if you don’t fall in love . . .

Lady Elise is a very content spinster. She holds intellectual gatherings and attends poetry readings, mind-improving lectures, and art shows. She runs her father’s household with quiet and determine efficiency, which is why she is absolutely stunned when Papa informs his three daughters that until Lady Elise is happily settled with—gasp—a husband, he will not consider offers for his two younger daughters.

Lord Simon St. George has happily watched one friend after another become leg-shackled, taking pride in the fact that his title is secured by a brother and nephew, so there is no reason to seek a wife for himself. When he sees a woman previously unknown to him at a ball, who seems to be hiding from the rest of the attendees, he is intrigued enough to introduce himself.

A friendship forms, and Simon is thrilled to have found a lovely, intelligent woman to pass the time with, while Elise has secured a way to thwart her father by pretending she and Simon are courting.

But even the best plans can go awry...

The Right Honorable, the Earl of Pomeroy, sat at the head of his dinner table and smiled at his three lovely daughters, who smiled back at him. Three unmarried lovely daughters. Each one was charming and pretty in her own way. And each one needed to find a husband and remove herself from his benevolence before he went broke.

The bills continued to pile up on the desk in his study. Bonnets, gowns, gloves, slippers, ribbons. The list was endless. While he had no doubt his two youngest daughters, Lady Juliet and Lady Marigold, would one day find their way to the altar, he had no expectations that his eldest, Lady Elise at three and twenty, would ever wander in that direction. Without a little push, that was.

Which he was about to give.

“My dears, I would like your attention, if you please.” He smiled at the loves of his life. Obedient as ever, they all gave him their utmost attention. One pair of blue eyes, two hazel.

He cleared this throat. “It has come to my attention that perhaps I have been remiss in assuring all of you secure the best in life. Everything that your blessed mother—“ he made the sign of the cross “—and I, had together. Love, marriage, children.”

Julie and Marigold continued to smile, but Elise stiffened and a frown marred her comely face. Ah, yes. That was expected.

“Of course we wish that for ourselves as well,” his youngest darling, Lady Marigold, said. A true treasure, and the image of her exquisite mother.

“Papa, I believe we spoke of this before.” Elise patted her mouth with her serviette and laid it alongside her plate. “Marigold and Juliet are well suited to marriage, but I thought we agreed I would continue on here with you. You know I do an excellent job of managing your house.”

“And my life as well, my dear.” He gave her a well-rehearsed fatherly smile.

“What did you have in mind, Papa? The Season is just starting, and I hope to find my true love this year.” Juliet, at nine and ten years, brought sunshine and happiness to his life. Along with a pile of bills for jewelry and shoes. Lord, the girl loved shoes and dance slippers. She must dance every dance at every ball since she went through two pairs at each event.

“I believe the best way to assure each of you has what every woman dreams of is a sensible method I have spent many a night deciding on.”

Two of his daughters stared at him with excitement since it sounded as though this was a plan to help them obtain their wishes and hopes. Alas, Elise apparently found the conversation disturbing. She did not look in his eyes when he gazed at her. He was aware his normal look of adoration had a bit of determination in it.

“What have you decided, Papa? Since I have no interest in marriage—as you well know—this plan is most likely for my sisters. I want to be sure it will be the best idea for them.” She wagged her finger at him. “You do come up with a scheme that is less than ideal on occasion, in which case I have needed to direct you toward another avenue.”

Yes the love of my heart, you spend a great deal of time directing.

The moment had arrived. “It seemed fair to me that you should all find your husbands in order.” He sat back and beamed as if he’d discovered the secret of longevity.

His beloved Elise frowned. “In order of what?”

Elise continued to stare at him, her mouth agape.

“Yes, my dear hearts. We will spend the next weeks seeing that our darling Elise finds her perfect match, as she is the firstborn of my delightful progeny.”

Juliet and Marigold gasped in horror and looked at their sister. Elise had made it known quite loudly, and often, that she had no intention of marrying. Ever.

Elise cleared her throat. “Papa, I assume you are joking with us.”

He turned his attention to her, forcing his steely determination to overwhelm the adoration. “No, my precious. It came to me in a dream where I saw your beloved mother who took me to task for allowing you to flounder when I should be guiding you.”

She seemed to steady herself and put forth her brightest smile. “Oh, Papa. While I appreciate your concern for my future, I believe we can turn our efforts and attention to Juliet.” Her lips tightened, and she glared at her sister, apparently looking for support.

“I agree, Papa. I would love to have help from all of you in securing my future.” His sweet second eldest nudged Marigold with her elbow.

“Ouch. Yes, Papa, I think Juliet is definitely the one we should be focused on. My turn will be next year.” Marigold rubbed her side and cast a reproving glance at her sister.

“Oh, my enchanting offspring, how I love you so. However, my mind is made up. We will see Elise a happy bride this year.” He beamed at them, looking from one cherished daughter to the next. ’Twas time for others—with hefty bank rolls—to cherish them as well.

“Papa, suppose I refuse?” Elise had never gone against his wishes in her entire life. She had always been able to persuade him to see things her way. Which was another advantage to his plan. She would be directing someone else’s life.

“Then, my dear, I am afraid it will take longer for your sisters to find their own true loves. You see, I will be unable to accept suitors for them until you are safely settled in your own little love nest.” With that pronouncement he stood and gave them a slight bow. ”Now if you will excuse me, I will retire to my library and enjoy a brandy before bed.”

Three girls sat opened-mouth as he smiled at them and left the room. He strode down the corridor, lighthearted. He’d put his plan into action, and soon he would be free of bills. Not that he begrudged his treasured daughters their fribbles, but a man could not watch his fortune dwindle every day without concern.

Although he had no son to whom he would pass along his title and money, it still disturbed him to watch his balance shrink monthly.

Grinning to himself, he poured a brandy and sat by the fireplace, raising a toast to freedom.

I laughed a lot during my reading of this darling romance.

True to Callie Hutton books, there's romance,comedy and you'll be in love with the Viscount and Lady Elise.

Elise and Simon's story is a fast-paced romp with plenty of drama, humor and sizzle. My favorite part of the book though, were the amazing, lovable characters.