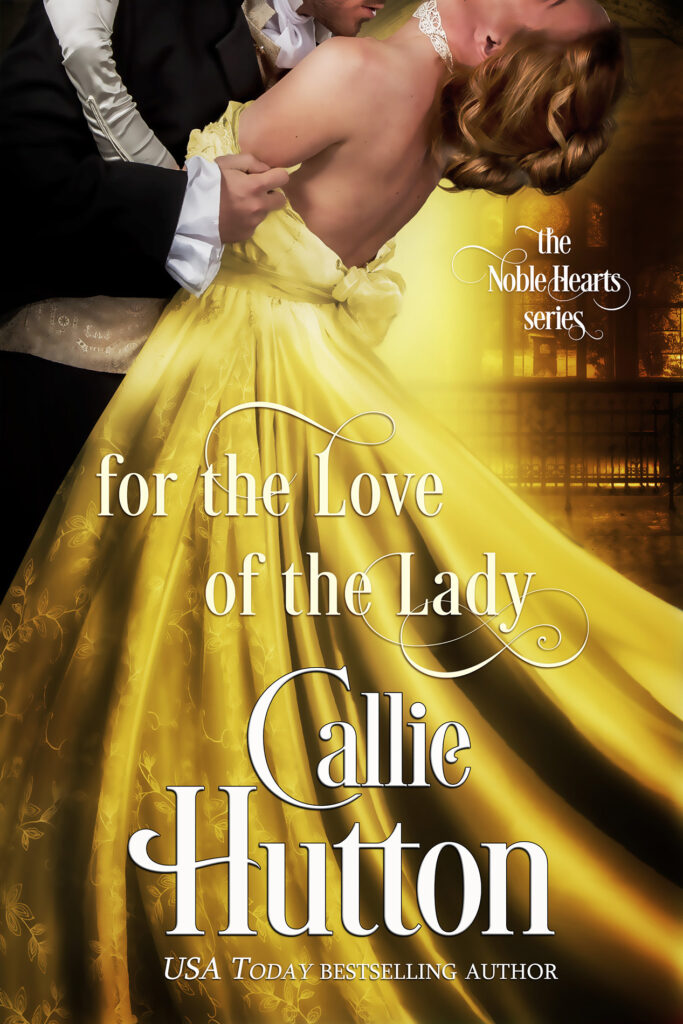 Part of the Noble Hearts series:

It’s time for their happy ending….

Lord Henry Pomeroy’s three daughters are finally married and happily settled in their own homes. He’s looking forward to grandbabies and the company of Lady Crampton, the woman who acted as chaperone and companion to his daughters the past four years—and stole his heart.

Except she is moving out of his house!

Lady Selina Crampton has fallen hopelessly in love with her employer. Now that his youngest daughter is married, there is no longer a reason for her to remain since her work has come to an end. She has rejected his repeated offers of marriage, Has the time come to confront her demons and tell him why she has refused?

It appears everyone is going to have their happy ending except them...

Lord Henry Pomeroy settled into the most comfortable chair in his library, a glass of brandy in one hand, the latest book he’d been reading in the other. With all the nonsense surrounding his youngest daughter Marigold’s wedding, he’d had little time to relax with his favorite things to do. Read and drink a brandy.

The only thing missing was Selina, Lady Crampton, the woman who acted as chaperone and companion to his two younger daughters before they married. Generally, she joined him in the evenings when she wasn’t accompanying Marigold to an event. She would sit and work on her embroidery while he read her various interesting passages from his latest book.

Where was the blasted woman, anyway? The bride and groom had departed two hours ago, and his other two daughters had arrived from preparing their sister for her wedding night at her new husband’s home, collected their husbands, and left. It had been a long day, and he was more than happy to have it done with.

He shifted in his chair, waiting for her arrival. Finally, the door opened and she entered. He immediately relaxed. “You know I can’t concentrate on my book with you not here.” He smiled at her and handed her a glass of sherry as was their practice.

She settled on her seat, took a tiny sip of sherry, and placed the glass on a small table in front of them. She laid her hands on her lap. Taking a deep breath, she said, “Henry, we must talk.”

Sensing something disturbed her, he lowered his book and gave her his full attention. He’d found over the years that when it came to women, lovely as they were, the sentence “We need to talk” usually preceded tears and recriminations. “What is it, my dear?”

She raised her chin and stared him directly in his eyes. “Henry, I am presenting my resignation.” She took out a sheet of vellum from her gown pocket and held it out toward him.

Henry studied her carefully and set his glass down. “What are you talking about?”

“My resignation, Henry. I am resigning my position. I must leave.”

“Selina, it has been a difficult couple of weeks. We are both tired. I don’t wish to play games. Of course, you cannot resign.”

She stood and paced. “Of course, I cannot not resign.”

Finally realizing she was serious, he tamped down his anxiety and stood and placed his hands on her shoulders. “What is the matter, Selina?”

She burst into tears, and he wrapped his arms around her and laid her cheek against him. She sobbed on his chest for a bit, then he handed her a handkerchief. She looked up at him with a red nose, swollen eyes, and took a deep, shuddering breath. “My work here is finished.”

“I can see you are very upset, so I won’t make light of your concerns, but you cannot leave.”

“I was hired as a chaperone and companion to your daughters.” She sniffed and waved her hand around. “Not that I’ve done such a wonderful job since they were all in a family way when they married.”

Henry leaned back. “Marigold, too?”

He pushed back the hair that had fallen from her tidy arrangement of curls onto her shoulder. “You have done the most remarkable job ever.”

“You run my home, you deal with the staff. You keep me company in the evenings. More importantly, you’ve made me realize my life could continue after my dear departed wife left us.” He made the sign of the cross. He took her hands and kissed each knuckle. “You taught me to believe in love again, Selina. And—"

She tightened her lips and closed her eyes. “Don’t say it, Henry.”

He cupped her face, stroking her soft cheeks with his thumbs. “I will say it. Over and over again until you agree. Marry me, my love.”

With tear-filled eyes, she slowly shook her head. “No. I’ve told you before, Henry. I cannot marry you.”

It's been fun watching Selina and Henry tap dance around their feelings. The attraction has always been an obvious one. Now it's time to explore where their hearts can take them.

A great read with a real twist at the end. Has plenty of banter, kidnapping, full of love. This story has had some tough times and overcome some serious challenges

Loved this book. Quick and easy read. Two people who should be together find a way for it to happen.