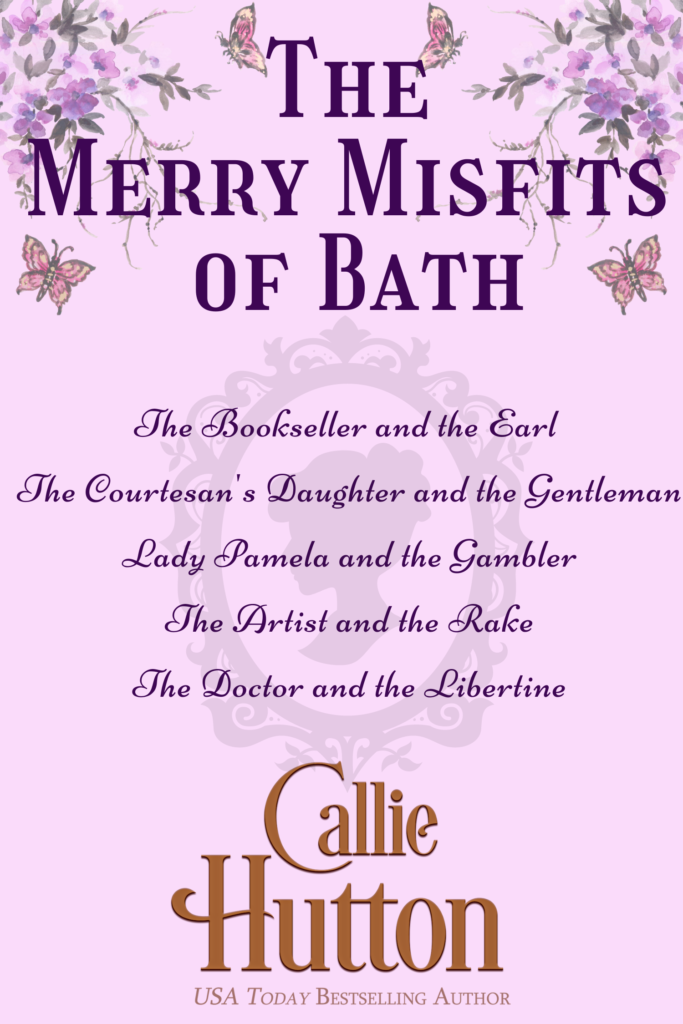 Part of the The Merry Misfits of Bath series:

The Merry Misfits of Bath is a charming Regency romance series from USA Today bestselling author Callie Hutton. Each standalone story features a heroine who doesn't quite fit in but who finally finds her happy ever after with a hero who sees her through the eyes of love.

The Bookseller and the Earl

Miss Adeline Mallory, who has suffered from dyslexia her whole life, convinces her parents that marriage is simply not in her future and to release her dowry to her so she can open a bookstore.

The Courtesan’s Daughter and the Gentleman

Miss Charlotte Danvers escapes the reputation her mother built as the most expensive courtesan in London and supports herself by teaching young ladies all the finer points of the ton who will never accept her as one of their own.

Lady Pamela and the Gambler

Lady Pamela Manning cannot get through an entire sentence without stuttering. But she sings like an angel. She’s happy with her new life as a music teacher, even if most of her students have no ear for music. The life of a social recluse with two friends whom she adores is fine with her, and she easily dismisses the attentions of Mr. Nicolas Smith, the owner of an exclusive gambling club in Bath.

The Artist and the Rake

Even though his family has been pushing him toward marriage, Marcus Mallory has no desire for the confinement of the wedded state. He enjoys the company of the ladies and likes his life the way it is. Since he is attempting to have a bill passed on sex slavery in the House of Commons he is requested to help in the rescue of Lizbeth from the brothel. Aside from the attraction he feels toward her, he also bears a sense of responsibility for her welfare.

The Doctor and the Libertine

After a tragedy puts Lord Sterling into an emotional spin that results in years of dissipation, he believes he has reached his lowest point when he turns up unconscious on Dr. Steven’s doorsteps after being dumped there by his friends. Suffering from injuries that keeps him in the clinic he begins to see the possibility of another life for himself. Now if he could only convince the beautiful, kind and caring doctor that he has turned the corner and is truly a different man.